I was fishing on a accustomed small local stream. I cast the Sumari 50S upstream and twitch around rocks in the water as I always do. I caught some char, but they were all small. Then I found a spot where a tree is hanging on to a pool. I caught a nice Yamame, which is nice enough for this stream. 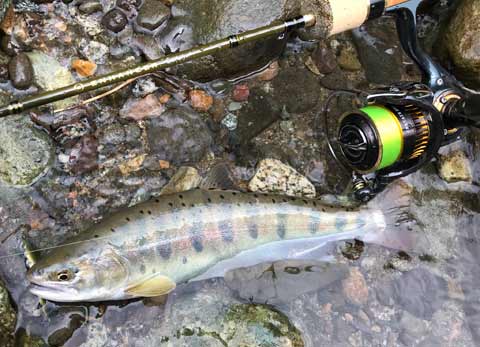 When I comes to a long shallow stretch, I knew there is a good one along the bank. I took a distance and made a good cast. Nice char showed up. Now it is lunch time.

I moved to another stream, but it looks like the weather is too good to fish. Unfortunatelly I found also many footprints on the both sides… This means that I need to fish differently with different baits. Otherwise there will be no chance. Nowadays heavy sinking monnow baits are quite popular, so I decided to fish surface with Sumari 50S.

Until then I tied the bait directly to the 4lb line, however, I got a call at that time somehow… I put 6lb leader in between. I made distance casts, to every potential spot in the stretch. Twitch, pose, twitch, pose, … the yellow line sucked into the water…

The fish started to run quickly right after I hooked up. The line goes out endlessly and the fish shakes the head. It looks like I got the right call. I could hook up securely and fight. Eventually the fish came up to me. 43cm trophy Yameme. Super. 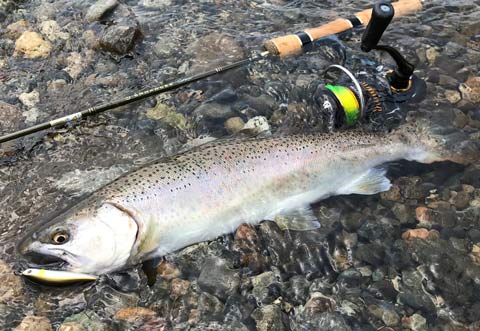 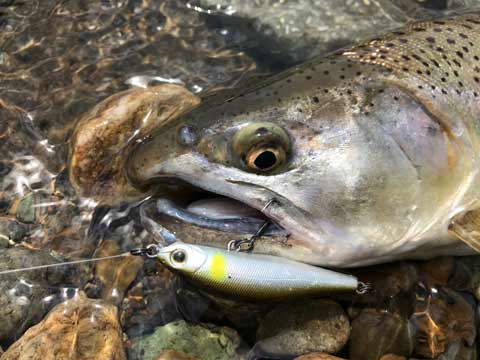